The Troops of St. George, a new group of faithful Catholic men and boys, has a very significant presence in Minnesota. There are four troops in Minnesota: two in the Twin Cities, one in St Cloud and a troop in the Rochester area. The Minnesota troops combined have over seventy five boys enrolled in this fast growing organization dedicated to teaching young men Catholic virtue.

This August our troops participated in the annual Mid-West round up at the exclusively Catholic campground of Round Hill near beautiful Arkansas, Wisconsin. The troops place an emphasis on teaching Catholic virtue and learning useful skills like archery, fishing, tomahawk throwing, knife safety and camping skills. Each day features a reverent Mass (nearly all Traditional) and Rosary each evening. The troop is blessed with many Traditional priests giving talks to the boys and hearing Confessions.

This year the troops were blessed with Cardinal Raymond Burke who came to offer Mass and encouragement to the over two-hundred men from across the Midwest.

We are most grateful to Mr. Tom Brannon who has been instrumental in organizing the Midwest troops and Dr. Taylor Marshall who founded the organization in 2013. 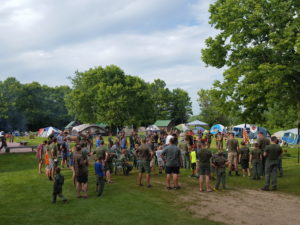 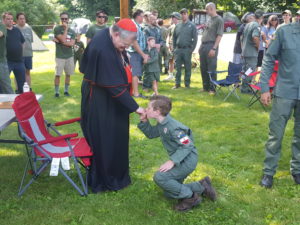 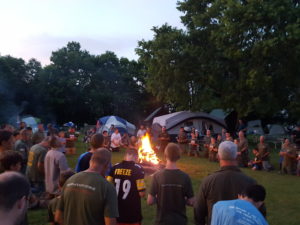